Chloe Genus (クロエ＝ジーナス) is a heroine in Conception 2: Children of the Seven Stars. She is available from the start of the game, and is the third heroine that the protagonist meets at Fort City. Chloe Genus is highly intelligent, having skipped several grades in schooling, and ultimately graduated top of her class in her college program (She was 14 years of age at the time). Eventually, she was called to teach at the academy. She is Chlotz Genus' older sister, by one year. Her main weapon is the Coquelicot, but later in the game it is upgraded with the Supernova Superchip to become Athena.

Chloe wears a long sleeved white shirt with red cuffs and red black vest with a violet bow. She also wears a red skirt. She has red hair and violet eyes. She wears a black and violet bow on her hair that forms her pony tail. When in combat or in labyrinths, she wears a black uniform that reveals her thighs, belly, and shoulders. She has 4 red holsters on her legs that carry the four flying guns that she uses during battle.

Chloe is very well mature for her age. Of all the heroines, she is the most mature and seems to be the most intelligent considering she skipped grades and graduated at such a young age. She is a teacher at the Academy and she takes her job as a teacher very seriously. She is strict with her students and easy on them when she needs to be. She and Chlotz are both brother and sister. She often finds Chlotz doing things he shouldn't be doing and like a big older sister, she usually feels that she needs to reform or correct her younger brother. In one of her heart events she felt that she was too hard on her brother and was worried if he may not love her anymore, although the Main Character assured her that will not happen. She is also very well known for both her voice and knowledge. She has her very own fan club and many of students go to her for help when it comes to everything in their lives, from school work to personal life. She often has huge crowd in the teachers lounge after school which makes it difficult for the Main Character to speak with her. She is very kind to everyone and cares deeply for her students and will not tolerate anyone who berates them. She also prefers if everyone will call her "Ms. Chloe".

It is unknown where her hometown or her previous time was before the events of the Main Story, but it is safe to assume that she is somewhere from the main continent(and therefore living in the same area as Fuuko), considering that Chlotz had to come to Fort City by boat. She is considered a genius by her brother. She graduated at the top of the scores at her college at age 14. She also wrote her thesis on battle tactics; currently, that paper is being used by the government as an official manual for ground combat. She is in charge of the 2nd year class that the Main Character is in. According to Chlotz, she got her Star Brand a year before Chlotz got his, and considering that Chlotz is a 2nd year, it is presumed that Chloe got her Star Brand when she was either 16-17 years of age. Since she is one year older than Chlotz, this would have made her a 3rd year at the academy making her in the game as 17-18 years of age. However, because she graduated at such an early age, the Academy instead had to invite her as a teacher in order to have her as a Disciple at the Academy. And like all the heroines, she is also an S-Rank Disciple.

Chloe can more easily get the Blacksmith out then other heroines.

Chloe In Her Battle Outfit Equipped With Coquelicot 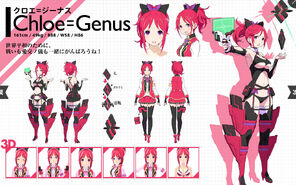 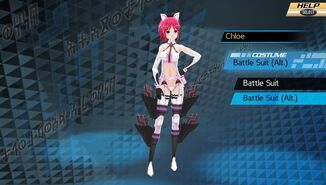