Feene Glass is a heroine in Conception 2. She is not initially available, but rather is added to the heroine roster after clearing the 3rd Dusk Circle, Greed. She is the seventh and final heroine that the protagonist meets. Feene is very grateful towards the protagonist after clearing the Gluttony Dusk Circle near her home town. As a result, she often tries to repay the protagonist. Feene fights with a kiteshield and a Gunblade; a sniper-like weapon. Her main weapon is the Lotus Grin, but later in the game it is upgraded with the Supernova Superchip to become Ares.

Feene has blonde hair and blue eyes. She has a small ribbon that straps as a cross on her left bang. Feene wears her Academy Elite Disciples Uniform whenever she is in school or anywhere else in Aterra. When she is in combat or in labyrinths, her uniform changes to that of a white and light violet dress. She wields a kiteshield and a sniper-like weapon which appears to be a Bladegun, and she holds it like a sword as well. She is the tallest girl out of all the heroines and her figure is said to even compare and if not, surpass Chief Ruby's figure.

The academy students and other heroines see Feene as a perfect student. She has a cool demeanor, and is both smart and athletic, which is said to be near that of a top student would be. Chlotz has officially started calling her "Miss Beautiful". She is considered one of the most popular female Disciples in the Academy and has been asked by every single club within the Academy more than once to join. Despite all this, she does not think that way about herself. She is always helpful to those around her, and her motto is "A promise must be kept at all costs. There's no such thing as a small promise. Every promise kept will turn into trust." that she believes and lives by. She gets lonely real fast whenever her friends are not around especially the Main Character and easily gets timid whenever she gets pressured. Her hobby is taking photographs of all things she enjoys in life, including flowers, friends, school events, and a stray cat which she officially named "Stray". She later on opens her own club that allows her to utilize her hobby, which is the photography club. She worries often about her friends back at her hometown and is ready to leave the Academy anytime to go back assist them should trouble ever arise.

Although her hometown was never named, it assumed that her hometown is near the dusk circle Gluttony. After the player clears the labyrinth, a picture is shown of Feene looking up at the E.S. Savage as it takes its leave to return to the Academy. She became very grateful to the Main Character and his team and tries her best in anyway to repay him. She also has a childhoold friend: Raul, who seems to have a crush on Feene, but she does not seem to reciprocate those feelings. She and Raul seem to be in a brother and sister like relationship. She excels in fencing that even the Main Character has asked her to train him.

In the Sky of the native land 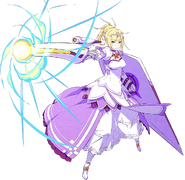 Feene's Transformation
Add a photo to this gallery