Start a Wiki
Wake Archus (ウェイク=アーガス, default name) is the protagonist of Conception 2. He is known by the name "God's Gift" due to his immense amount of Ether. Due to the amount of Ether he creates, it is possible for the heroines to go into the Dusk Circles with him to combat the enemies at their source and ultimately sterilize the Dusk Circle. Wake is given an "Ether Amp" to fight with, which utilizes his Ether to empower his weapons: Dual Swords made specially and specifically for him.

Wake has silver hair and teal eyes. He wears the Academy Elite Disciples Uniform with a violet edge lining that is unique only to him. He does not have the gold edge lining that the S-Rank Disciples all wear, despite later achieving S-Rank. When in Dusk Circles, he wears a sleeveless black suit. Wake also wears a pair of arm bands, almost like compression sleeves, that are also black. The outfit has white and violet lines that run through it. Despite being able to switch weapons that give different appearances in-game, the animation for when he transforms always seems to be his default pair of Dual Swords, called Twin Blades in game.

Wake is a kind and dense person. Something that almost all the heroines agree on. However, the players choice of dialogue can show different sides of his personality. Such as a snarky, sarcastic and witty side to him. Wake also holds a deep hatred for Dusk Spawners. Initially leading to reckless behaviour during his travels through the Lust labyrinth.

In one of the bonding events, it's revealed that Wake lived in a place called Gazel village, close to Shelgard. It's also mentioned that he used to run a lot of errands in Shelgard.

Wake, however, has had a bad history with Dusk Monsters prior to the main story. His hometown was attacked by Dusk Monsters on the day of his older sister's wedding. His entire family was killed, but he was saved by his older sister before she died. It is presumed during this time that he acquired his Star Brand and developed his experience to fight Dusk Monsters, which probably explains why he was able to handle a group of Dusk Monsters when he saved Fuuko and Chlotz at the beginning of the game.

The Protagonist aka God's Gift 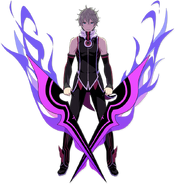 God's Gift In His Battle Outfit Equipped With Twin Swords

God's Gift, as he appears after transformation 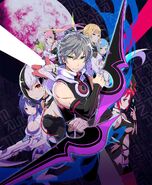