Torri Feiiji is a Heroine in Conception II. She is the sixth heroine that the protagonist meets while at the Academy, joining the party after the Gluttony Labyrinth is completed.

Torri comes across as an odd individual, with little common sense and is clueless to her strange air. However, she is very kind-hearted. Her main weapon is the Beehive, a large, mobile Gatling gun. After being upgraded with the Supernova Superchip, the Beehive becomes the Dione.

She is voiced by Janice Kawaye in English and Mai Kadowaki in Japanese.

Torri has half black and half white hair, split down the middle by color, that parts and slightly curls in opposite directions, pale skin, and red eyes. She wears a large black flower or star-like decoration on the white (left) side of her hair and two smaller white decorations of the same shape on the black (right) part of her hair. She wears the Academy Elite Disciples uniform everywhere within Fort City.

When she transforms, she wears a ruffled mini dress, gloves that extend halfway up her upper arms, and stockings that extend halfway up her thighs. Her clothes mirror her hair's monochrome split coloration, with her dress and gloves inverted (with the black half on the left and the white half on the right instead) and her stockings matching her hair.

Torri comes across as an eccentric person, and speaks slowly. She has very little common sense due to being raised in a laboratory and not having been socialized well as a child, so she often misunderstands sayings and sometimes says odd things of her own. Despite this, she is kind to everyone and always tries her best to keep her promises, regardless how ridiculous they are. She believes in the trust that is built from promises much like Feene does. She is always curious about the locations in Fort City, tends to explore a lot, and has an admiration of birds.

Because Torri was raised in a laboratory, she feels like a caged bird and tends to stare out the window during class. A recurring gag for her story arc or her heart events, shows that she is always looking for something to eat or is currently hungry. She also joins the Magecraft Club in hopes of building a bird that will allow her to fly in the sky, which is revealed to be a Star Energy-fueled airplane later on in the story.

Not much is known about Torri's parents or where she was born, since sometime prior to the main story, Torri's parents had given her up to AngelMarker Industries and the employees of the company raised her. To her, this childhood felt like a cage and caused her to stare out into the sky a lot. She then eventually received her Star Brand and was transferred over to the Academy within Fort City as a first year.

Torri comes to the player at a low level of 6 and cannot produce many classes, but tends to be a rounded character that can produce a variety of classes early on, similarly to Fuuko Amicus. However, she favors the more physical classes and is less inclined toward Magic Attack and physical Defense. She can easily unlock the Ranger class early on.

The player can give Torri gifts to improve their relationship. These items can be equipped to change her appearance, though they do not change any stats.

It can be found on iTunes, along with an EDM variation, as part of the official Conception 2 soundtrack. 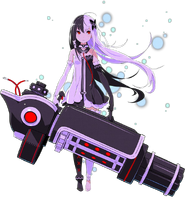 Torri in her battle outfit, equipped with Beehive 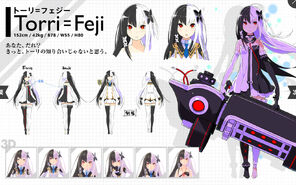 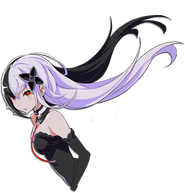 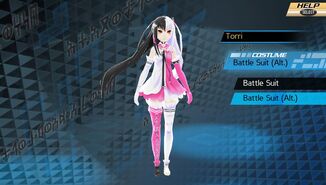